When I was visiting my sweet cousins this past summer, cousin Jan came to me with a heavy-looking red book in her hands. She held it out to me, “I’ve read some of this. It’s Grandpa’s journal from his time in the army during World War One.”

As I flipped through it, I found some loose pages. I asked her what they were and she said she didn’t know.

All that afternoon, she and I transcribed what was Grandpa’s earliest recollections and his Christian testimony. I say ‘transcribed’ because his handwriting was nearly illegible. He was left-handed and his teachers taught him to write right-handed, you see. Some words we had to figure out letter by letter and then look up on the internet to try to decipher them.

So, I give you my Grandfather’s story, in his own words. 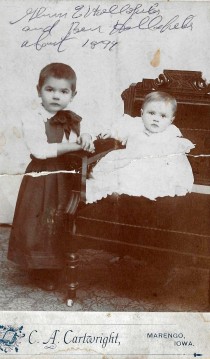 Father was a blacksmith.I was born in Raymond, Iowa and moved to Ladora when I was 1 years old. We moved to Crawford, Colorado when I was 6 years old. In Crawford, Father died in the spring of 1900. I was nine years old. Mother brought my brother and I back to Iowa that year, after selling the blacksmith shop and the house in Crawford. We lived with her folks a few months. Then she bought the hotel in Washburn and operated that for several months. When she married Frank Hemmer we moved to Caliofe, Iowa, near Hawarden, lived there a few months and moved to a farm across the big Sioux River to South Dakota. Frank Jr. was born in Caliofe. I think I was 11 years old when he was born. We lived in S. Dakota three years on different farms and another brother was born. Times were pretty hard. My younger brother, Ben, and I didn’t get to go to school very much in those years.

In 1912, my brother and I were two of four young men living on a farm on the south edge of Waterloo, Iowa. We were all close friends.The oldest of the four was the boss. We would pitch in together with the plantings and the harvests, trying to scratch together a living. An elderly couple lived on a farm next to ours. One of the young men was their son. This neighbor kept his milk cow in our barn and pasture. Every morning and every evening he would come to milk her. He was of German descent. He always had a smile and a kind greeting for all of us boys.

Some way or another the question of eternal salvation came up and this old gentleman said he was as sure of heaven as if he were already there. I could do nothing but argue with him. He never used rough language, and was careful how he spoke around us. I guess that impressed me, but I had too many questions about his message. No matter what kind of argument or question I threw at him, he would bring a little Bible out of his pocket and read something that seemed to back up what he said. Things went on like this for some time, even into the late evenings. By the light of a smoky old lantern, he would tell Bible verses to us.

The boss was losing sleep. He said if the old man was right, he wasn’t saved, even though he was a baptized member of a church. That old man impressed him. He said he’d never had that old man’s experience. He could not look back to a time in his life that he had been born into the family of God. One of the verses the old man used was John 3:3, and another was John 5:15.

I can tell you, none of us believed the Bible was the word of God. We were pretty shook up. Then one day, the boss came to us and said, “I’ve been saved.” He was born again by the Spirit of God into the family of God.

I told the old man, “You have what you wanted, now leave the rest of us alone.” His wife sided with me and was well-pleased that I said that to him. Though she was saved two months later, for a while she was against it and supported us being against it.

But I have to say we were thankful that he did not leave us alone.

A few months later, my brother was saved. In the meantime I had got started farming on a small farm quite some distance away. My brother and I were “batching” it together. But the question of salvation never left me. It bothered me during that Spring more and more. On the 8th of May, 1914, I found a letter in the mailbox when I came in from work. It was from the fourth young man telling me he had been born into the family of God, and he said, “I don’t know if you are saved, but it is a wonderful thing to know you are on the right path to heaven.”

He knew I wasn’t saved, but that was his way of letting me know. I was shook up terribly. Here I was, left behind of the four young men. They were all on their way to heaven and I was not.

I read my Bible that evening until very late. I was still in the dark in more ways than one when I went to bed. My brother was helping a neighbor who had broken his leg and was not home for me to talk to. The next morning I got up to do morning chores and came into the house for breakfast. As water was heating for coffee, I picked up my Bible. I read it some more to try to see if I could find some help. I thought, if I have to go to hell I will take my Bible with me. I didn’t really know where to begin. I happened to open it to Romans 10: 9 “that if you confess with your mouth Jesus as Lord, and believe in your heart that God raised Him from the dead, you shall be saved;” I believe those words glowed like they were painted in pure gold.

For the first time I really believed that God had raised Jesus from the dead. I had a head belief for years but not a heart belief. For the first time I really believed God. I didn’t remember whether I ate any breakfast or not. I finally hitched up the harness to the drag. I was getting plowed land ready to plant corn on Monday. That was Saturday the 9th of May. I would make a couple of rounds with the drag and then let the horses rest a few moments while I read again Romans 10:9.

About 11 A.M. a motorcycle roared to a stop on the road across the field I was working in. And here the boss was, coming across the field to meet me. I spoke first, asking him what brought him down that morning. And then I told him I had gotten saved earlier that morning. I shook hands with him after I told him I was saved. He had come down about fifteen miles to see me. We visited for a few minutes.  I said, “I’ll go in and fix some dinner.”

He said, “You take the motor cycle around to the house and I will make a couple of rounds.”

I came up to the house, and as I did, I saw my mother and step-father were there. They had brought some young cattle down to put in our pasture as we had more pasture than we needed. I told mother how I was saved that morning.

She said, “You were always a good boy.”

I told my step-father. He just took a big chew of tobacco in his mouth and didn’t say anything. Mother had found things and was getting dinner ready. The boss came in from the field and we unhitched and fed the horses, and came in to dinner. The boss talked a little with my step-father, but didn’t make an impression with him. They left for home soon after dinner.

I turned the horses out in the morning and left a note for my brother and the boss. I got our motorcycle and went to the boss’s home. I had a flat tire on the way and had to stop in a farmyard to repair the flat. I talked a little with the farmer’s family about salvation.

That night I was on the street with some other Christians and the boss. I was out in front of the others telling everyone who passed by how I was saved. I don’t remember anything much that I said except that I had been going to a Christless grave before, but now I was saved forever. If I died right then and there I would be in heaven.

8 thoughts on “In His Own Words: My Grandfather’s Diary”

Error: Twitter did not respond. Please wait a few minutes and refresh this page.