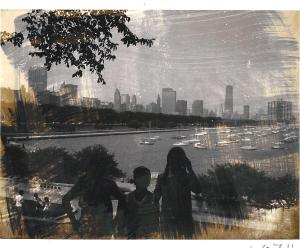 Robbie had to travel 40 miles to find a block of ice for the camper. No one seemed to know what he was talking about. Then, one 25 lb block costs a dollar!

The temperature outside is 55 degrees and there are kids swimming. They must come from a cold region because I think it is too cold to swim.

Ate breakfast and waited for R to return from getting ice. The night stay and breakfast was $36.01 so I charged it. We were on the road by noon. The weather is warmed to 65 and the sun is shining. The kids are laughing – everyone is in a happy mood with this nice weather.

I don’t understand why motels don’t put campgrounds on their property. They could make a good deal of money because there are so many campers on the road. Likely because an average family of four can’t afford $20 a night in a motel or hotel. Compared to $3.00 a night at a campground the motel is mighty expensive.

Stopped at 1:15 for lunch at Nickerson Farms (lunch and souvenirs $13.00). They have no decals. We need Ohio, Michigan, Montreal, Quebec, New Hampshire, Delaware, Vermont, and Maine. We need to find a Stuckey’s to buy them and “catch up”.

Now on Ohio Turnpike (toll .95) found a decal at the toll station (cokes and sticker 1.11)

I noticed web-worms in the trees along the highway. Now on Indiana Turnpike ($3.35 – This is outrageous!)

Now in Chicago, the toll to get into Chicago was only .50. Found a Roadway Inn to stay while we take the kids to some of the museums in the city. The kids wanted to swim. Everyone was hot and tired of being in the car. They had fun swimming but apparently Jeff walked into the deep end and Becky had to grab him and get him to the side. Saved his life. Although they didn’t make much of it at the time. This is the sort of stuff I stay awake at night thinking about.

Supper at the hotel.

The first place we stopped today was the Shedd aquarium. ($2.75 for parking, souvenirs, and entrance fee) I love the coolness of the interior. The kids were fascinated by the fish and the exhibits.

Then we went to the Science and Industry Museum. Lots of buttons to push to make exhibits move. I’ve always been disgusted at the tiny babies in jars. Yuck!

After lunch we went to Pacific Garden Mission. A dark building in the middle of a not so nice area of downtown. It is called skid row.  My uncle Charlie Ross is the director there. 646 South State Street.

It is one of the oldest Christian Missions (not Catholic) in the U.S. The radio program “Unshackled” is produced here. While we were there we saw some interesting things. I think the thing that stuck in my mind was the room where they heat up all the bedding and men’s clothing when they first arrive. The material is left in the hot room baking all night and in the morning the floor, covered in bugs that crunch underfoot. This is a wonderful ministry. Many are saved here because of the testimony of so many. The drunk sailors come in in the morning after a night of living it up. They can’t have breakfast until they’ve heard the gospel.

We are taken out to eat by the my aunt and uncle. It was a wonderful meal. They are such good people. I think their daughter Nancy lives in the Chicago area also.

Three more Illinois Tolls (.45 X 3) Souvenirs and pay toilet (1.82) I do not understand pay toilets. Why? What are people with no money supposed to do?

hamburgers, shakes and two blocks of ice in a tiny town just outside of Iowa ($5.11). Stopped in Dubuque, Iowa for gas, clothes washing, drinks, and groceries ($11.46) and then on to Woods Park, Gainesville, Iowa ($2.84)

We found the Norwegian Museum ($2.50) at Decorah, Iowa. The museum houses the most colorful and comprehensive collection of things brought to America by an immigrant group.

Then on to Spillville, Iowa to the Billy Clocks Museum. Here, there is part of a collection of clocks, the work of Frank and Joseph Billy. The collection took over 30 years to assemble. Some of the clocks are over 10 feet tall. Most of the clocks have chimes and movable figures carved in wood. 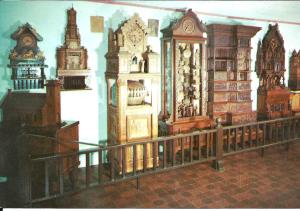 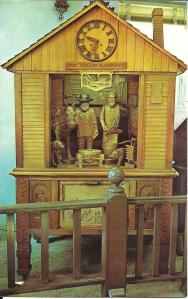 Gentle thrum from the vast above

You grasp the edge of splendor.

One thought on “To Chicago and Beyond 15”