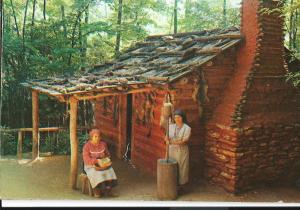 From My Mother’s Journal, July 6:

Left at 10:45 AM traveling along the Blue Ridge Parkway – a scenic drive. Lots of pictures taken. Stopped at the first place we could for souvenirs. Jeff got a book about rocks ($1.60) Becky bought some things and told us she’d pay us back. She owes us $4.08. We drove a while and stopped and picked up a few rocks for Jeff. Stopped at Crabtree Meadows for lunch. It was good. ($11.25). Stopped at a museum about North Carolina Miners. Saw three “long-hairs” lolling in the grass beside the highway, they had been inquiring about a job at the museum.

Gas is expensive along the Blue Ridge Parkway. Almost 50 cents a gallon! Stopped for worms for Jon’s fishing at Boone, NC.

Stopped at the Julian Price Memorial, the museum, and park ($2.00). We really enjoyed the cool weather at this park. A little bear showed up behind Jon as he was fishing. Becky was swimming in the lake when the bear appeared next to the bait that Jon was using for his fish. She said he jumped into the water fully clothed when he caught a glimpse of the bear. I think the bear was more interested in seeing if Jon had any fish, which he didn’t, so the bear left. No electricity or showers here. We rigged up the portable shower (cold water hose) for Becky and me to take our daily shower. We decided to stay here a while as it was only $2.00 a night.

Left the Julian Price Park at 11:25 AM. The Rhododendron are beautiful. We see only one genuine hillbilly in all the state. He was walking along the highway with a staff like he was used to walking from place to place. The last park was so pleasant we would have stayed longer if there were hot showers. Stopped at Cherry Hill shop for souvenirs ($2.15) and coffee (.47). Lunch at Bluff Lodge. Stopped in Cherokee, NC as we usually do. We love the Indian ceremonies but don’t take the time to explore as we normally would. At Mabry Mill we watch corn being ground the old fashioned way. Streams were diverted through a wood trough to turn the old wooden wheel. We visited the blacksmith shop. The blacksmith was forging some scissors. We stopped at the souvenir shop and I bought a spoon and some corn meal. Bought some post cards to send a thank you note to the Schleifs and to Jack Innes. At the end of a winding road we found Doughton Park.This park doesn’t look nearly as appealing at Price Park did. We only stay the one night.

The Parkway enters Virginia at 2:15 PM. We notice the beautiful orange wild flowers mixed in with yellow and white. I don’t know what they are. This Parkway, though not so smooth here, must be the most beautiful road in the world. Only saw one group of colored the entire time. I don’t know if they try to keep them out. I don’t know. The speed limit is 45 MPH and the road is litter free. The flowers look like they were planned but I know they are wild flowers. Park rangers patrol around the clock. The car uses almost twice as much gas in these mountains and hills than on the flat highways. Plus the gas is more expensive. What a way to run things, right?

As we start out again Jon starts a huge fight with Becky and Jeff. Both Becky and Jeff crying. They are unhappy and saying they want to go home. Robbie sides with Jon. I don’t know what the fight was about and I don’t care. Just wish they would get along. Stopped for lunch at Howard Johnson’s (11.60) Becky orders clams – we all ordered the clams. Seems to make everyone happy. Got some good apple candy made in VA.

Next stop is Natural Bridge Caverns. ($8.10) There are hymns playing from somewhere taken from right out of our hymnal, it seems. The long walk around the cavern and the bridge was worth it. The kids seem to be more calm and we are all in a general good mood. Post cards and drinks (.52) 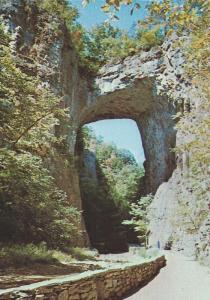 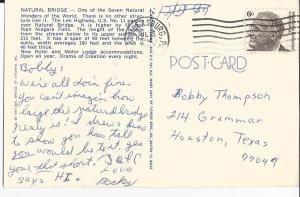 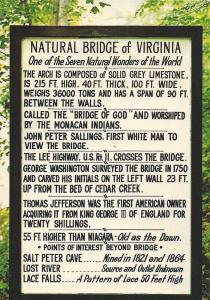